I work for a cycling association in Lille named “Droit au Vélo”, in the North of France. Following a call for projects from the city of Lille concerning mobility in 2021, we proposed to the city to set up a Telraam sensor project. Since September 2021, we have offered our many members the possibility of putting a sensor on their window. We also have them in some corporate/association offices. So I manage this network with our members located in strategic streets.

I have a question about the Bicycle category that becomes Two-wheelers.
Does it means this category now officially counts :

I understood that the difference is made on the speed more than the shape, I would like finally to have the confirmation of what encompasses this category.

thanks for your question Mathias

To answer your question, the two-wheeler category for V1 data covers objects that have a particular shape rather than a speed, since a bike is still a bike whether you are struggling along at a speed just enough not to fall over like me, or speeding past like a Tour de France rider.

This is why the device cannot currently differentiate between (push) cycles and motorised two-wheelers like scooters or motorbikes, and we therefore group them together.

A mobile / kick scooter (or step) is actually much more likely to be detected and classified as a fast-moving pedestrian than a two-wheeler.

We are still testing and training the AI on other modes, and we plan to do more to separate out (kick) scooters in future, but this work is ongoing so we cannot promise this separation at launch.

I trust this helps, but let me know if you need further details

Hello Rob,
thank you for your answer, i understand bether this new classification. So bike, scooters and motorbikes are toghether on two wheelers catgory, and the pedestrian and the kick scooter and e-scooter are togheter.

I thought Anne Hidalgo was going to ban them?

We agree that the scooter category (in its many and changing forms) will become more popular and we will adapt the S2 recognition accordingly as soon as we can, but for the V1 (which is what we are talking about today), the scooters will stay in the pedestrian numbers.

Where is it that you see information that might be confusing? I’d be happy to update or clarify it

Yes to ban the free floating operator, the Parisien will vote to decide this the 2 april…!

In my opinion, it’s could be described in this area for the pedestrian and two wheelers, something like this :
*Pedestrian : could included scooters.
*Two wheelers : included bicycle - motorcycles - moto scooters 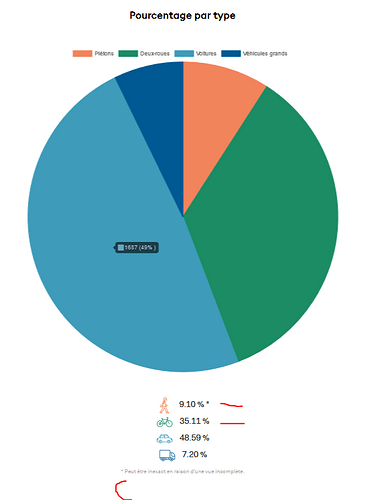