Trees and plants increase the attractiveness and liveability of urban streets. They turn grey street canyons into streets with shade, colourful flowers, buzzing insects and maybe even the pleasant tunes of birds signing.

Several Flemish cities have initiatives to help citizens make their street greener. One of the better-known possibilities in this regard are groenslingers (lit. green garlands).

To make a groenslinger, two houses on opposite sides of a street remove one tile from the sidewalk. Here, a vine or other climbing plant is planted. At first, it simply grows up along the wall. Then, when they reach the first floor, both plants are guided to the other side of the road with a horizontal metal cable. When the plants meet halfway above the street, they create a green garland from side to side. This usually takes about two years.

A new garland in Ghent. Still needs some growth before it is complete. 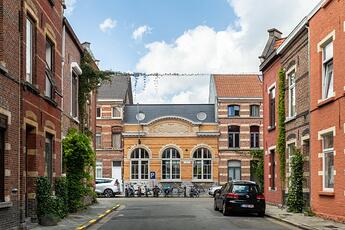 A mature garland in Antwerp. 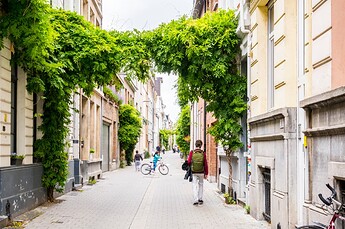 Your own groenslinger?
When two neighbours agree to connect their houses with a groenslinger, a professional from the city comes to remove the tiles from the sidewalk and to install the cable. Depending on the city you live in, the plants themselves are either provided by the city too, or are to be bought by the citizens themselves. Maintenance of the green garland (e.g. pruning and clipping) is done by the city.

All in all, it’s a low-cost but high-impact way of greening a grey street. Especially when there is not enough space for trees to grow big. The only thing you need? Neighbours who share your love of plants

Does your street have greenery? Are there examples in your city or town of grey streets that have turned green in recent years? Besides groenslingers, what other low-cost options are there to bring nature into residential streets?

Here is some more practical information by the way. Just a selection of three cities… 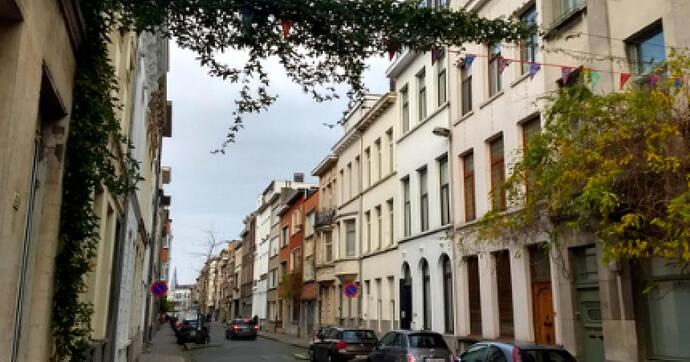 In Borgerhout, Antwerp (other urban districts of Antwerp have similar initiatives): 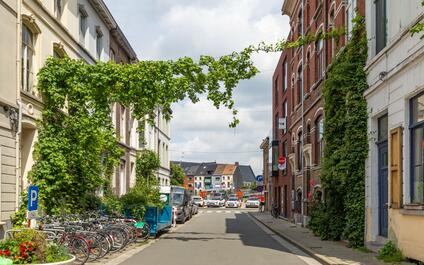 I have a climbing bush (orange trumpets) that grew sponteanous inbetween the cracks of my sidewalk. It has taken a few years but it has reach my second floor windows and a pigeon has built a nest in it. I will not be able to connect to the other side of the street since it’s a busy fairly wide street. I also have two smaller “geveltuintjes” of three tiles. I have enjoyed seeing beautiful greenery in Berlin a few years ago. Diana

If a street is too wide, a green garland is indeed impractical. In Antwerp, for example, garlands are only allowed if the street is less than 10m wide.

Does your city require you to ask permission for these geveltuintjes?

I also planted a climbing plant against my (fairly new) facade in Mechelen last year.

It’s a yellow kamperfoelie, but it still needs some time to grow.

We don’t have houses on the other side of the street so it’s not an option to connect it. But I loveeee the idea!

Here’s a nice example of the first garden street in Mechelen. They also planted ‘groenslingers’ in a later stage. Next to that they sacrificed parking space for greenery and were very mindful of rainwater collection. The perfect example of a street on a human scale realized by a great collaboration of neighbours and support from the city! 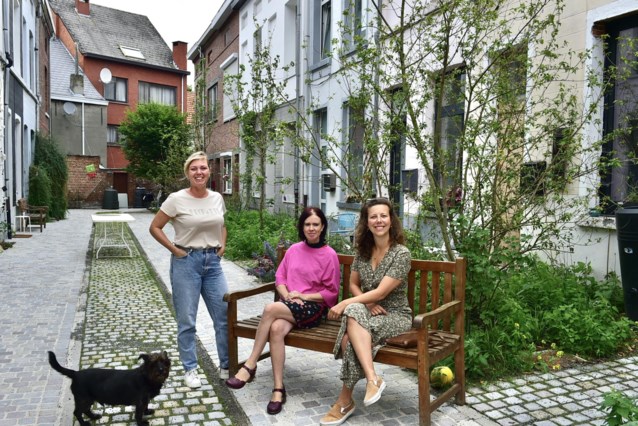 I love these ideas. I am not sure if UK streets are built in a way to allow the connecting garlands, unfortunately. However, I am keen on “living walls” and am considering adding one to the front and back of my house. Interestingly, not only do they look nice, they absorb pollution AND act as insulation. BONUS!

In the interim, I have been growing a single Wisteria tree for about 10 years in a pot in the front and finally it is starting to flower - so fingers crossed for this year 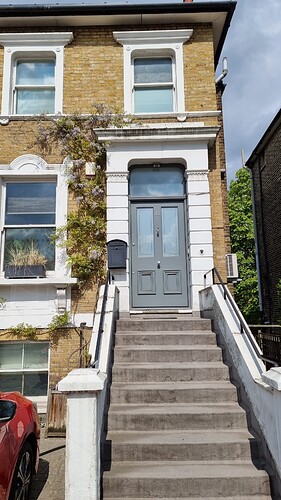