Combined mobility, in which different means of transport are combined to reach a certain destination, is becoming more and more popular among commuters who want to leave their car behind.

One spectacular example of this trend is Antwerp’s Waterbus, which had its best year yet with no less than 774.000 passengers in 2022. 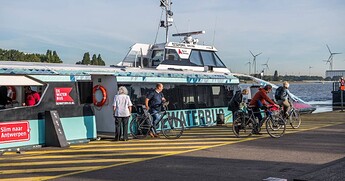 De Waterbus is a ferry service on the river Scheldt that connects a few villages south of Antwerp to the city centre, and onwards from there to the industrial port area north of the city. The ferry has one line, with a total of eight stops on both banks of the river. The ferry service actively caters to commuters who want to avoid the infamous traffic jams in and around Antwerp. People can bring their bikes onboard, so they can easily continue their journey by bike after hopping off the ferry.

For Flanders, the combination of boat and bike is quite a unique form of combined mobility. And, in my opinion, also one of the most exciting. Just imagine feeling the water drops on your face and seeing the sun rise across the river as part of your everyday morning commute…

For my own commute, I sadly do not use a ferry…
Instead, I use three traditional modes of transport to get from Antwerp to Leuven:

What does your commute look like?
Which interesting modes of transport do you combine to get to work?

I love the ferry boats in Antwerp.
I used to live in Antwerpen Berchem and when my friends (not from Antwerp) came to visit and we planned ‘a day out’, I made sure to include a ferry boat ride (eg. to Linkeroever)

Unfortunately for my commute a boat isn’t necessary as well (I would love it though). I’m always biking to my work. I’m lucky enough to live within 5km of my work.

I’m wondering if there are any other cities / places in Belgium (or the rest of the world) where it is normal to take a boat to commute?

Well there are boats you can use to commute to work even in London, if you want, though I don’t know anyone who does.

My own transport modes for my daily commute involves:

Even for commuters who need to travel parallel to the Thames, the London tube is more convenient than the ferry I guess?

Talking about combined mobility: Do you know if Londoners use the Cable Car to commute across the river? Always seemed like a weird mode of transport to me, especially for a European city. I believe South American examples of such urban cable cars are really popular among locals, but in London it seems more of a failed tourist attraction than an actual solution for commuters…

Anyone ever tried the London cable car? Or a cable car system in South America? 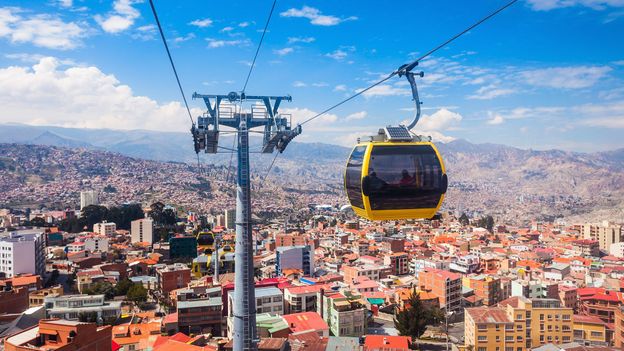 The rise of the urban cable car

Once regarded as little more than a tourist attraction, cable cars are now proving to be an environmentally friendly method of commuting, writes Len Williams.

Indeed I have, but only once. It is not located on a ‘commuter’ route. It is not even a tourist attraction, but more of a ‘folly’ (TBH).

I like the idea in general, but this one is poorly located and underused. On the other hand, I had family living on Roosevelt Island in Manhattan, and they have a very busy commuter cable connection … which has also featured in numerous ‘disaster’ scenes in movies, so not the best advertising!

Here’s me and my wife on the London ‘Dangleway’ in the middle of a long walk on a cold, wet January day in 2021 during the height of lockdown when I celebrated my 50th birthday as best I could 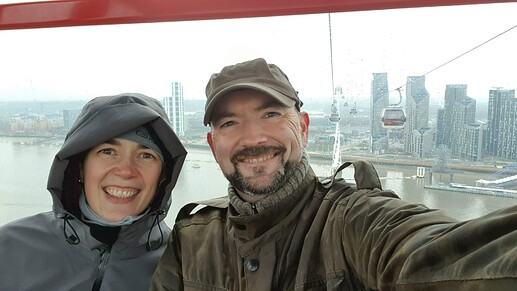 My daily commute is very standard and looks like this:

That’s it in the morning.

In the evening it is of course the other way around (up hill!) And also with an extra stop to pick up my son from school (600 m from home).

Hi there!
Due to frequently variable combinations of work and family commitments I don’t have a fixed way of commuting, but I have 3 main options: